Ödängla has a small archipelago which to me has great beauty. Every little island has its own characteristic silhouette. As I have watched them since I was a small child, they are like old friends to me. They change a little every year, just like people. Outside that you can see the island Öland at a distance. Every little island has its own name, like Solskär, ”Sun island”, Ekö, ”Oak island”, Arneholm ”Eagle island”. The name of this small island is Kålkuten, ”Kål” means cabbage, ”kut” means ”young seal”. There are hundreds of placenames in Ödängla, given over a period of maybe a thousand years.

The straight village road was created about 1812. It was a part of a project of modernizing the farming at Ödängla. At the same time the whole village was moved from another site a couple of hundred meters from here.

Old barns from the 19th century at the farm of Karl-Bertil Johansson. This is the biggest farm
in Ödängla and the farmer is up to date in methods, but still keeps the old houses at the farm. His wife and daughter are very interested in horses. The family has relatives in Australia! The local conditions makes it necessary for him to run a very diverse farming with fishing and forestry as important parts
of the economy. He has cows, sheep and horses. The picture is taken Christmas of 1996.

The eel to the right is a local gourmet speciality. It has to be rather big to meet the standards of dried eel. It is salted and after that sun-dries, after that cooked in the oven. Delicious! Other fish in the Baltic Sea are: herring, pike, perch, cod and another of my favourites, a salmon-relative that I don’t know the english word for – we say ”sik”, pronounced ”seek”.

The home of Eric and Gunnel Lönnbom, my mother and father. The house was built in 1888 by the farmer Herman Svensson. He was one of many Swedes that emigrated to America, but came back. The last time he returned his wife had died just recently. He later sold the farm to Johan Lönbom who was my great grandfather. His son Axel took over about 1918. You can see the cowshed and barn built in 1917 below.

My brother Håkan Lönnbom on the tractor in the middle of the hay-making 1996. The hay-making has been extremely difficult this year (1996) since it has been raining a lot. The hay-making was at last
finished and we could harvest just about enough for the needs of the farm.

About 1928 this picture was taken at the farm of Eric Lönnbom. Eric is the little boy, surrounded by his cousins Axel and Anton plus the farm-hand Erik. The roof is covered with thin flakes of wood that has been tared. Axel to the left had a limp. He had been under surgery for appendicitis in his early years and the surgeon was not diligent enough when he finished the operation… 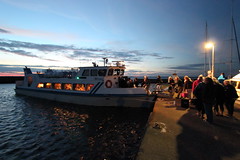 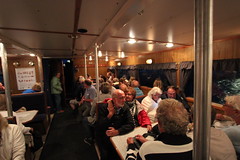 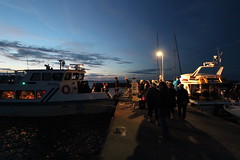 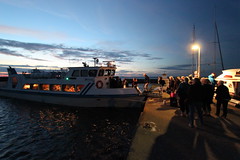 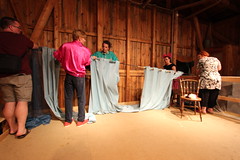